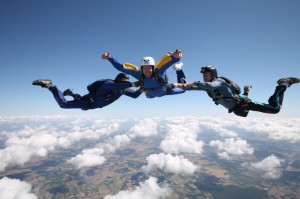 014 one of our own jumped out of a plane in the name of charity.  This was not a tandem which is common for someone who has never done it before this was an accelerated free fall which means although he has two instructors for 30 seconds the rest is all on him.

YES, he is completely mad but shows his dedication to a very worthy cause.  We managed to raise in excess of £500 and continue to accept donations as the company is raising money for a whole year.

Take a look at our on our Facebook page where you can view the video of his jump:

Don’t worry though, they don’t just let random people turn up and jump out of planes for fun.  On the Friday before Chris attended a full days training at Headcorn Aerodrome which consisted of theory, followed by some practical and then a test.  As usual Chris passed the training with flying colours which saw him and 3 other people learn how to read the instruments, communicate with hand signals, to jump, pull the parachute and to land.

You may think that teaching someone to jump is easy but when you’re jumping out of a plane there is allot to remember and jumping correctly is a very important part.  Jumping from one foot and landing in the sky with both feet in the same position whilst keeping your body straight is tougher than it sounds.

Whilst he waited patiently on jump day the nerves began to show a little but his determination never faltered.  He kitted up, went up in the plane, jumped and landed safely by late morning, which was lucky as the wind got up after he jumped and no more free falls were taken up while we waited for the DVD to be ready.

Grate Stoves & Fires is proud to be have such a truly amazing man at the head of the company and we wish him all the luck in the world for the next crazy adventure.

Anyone wishing to make a donation can do so here.

Share on TwitterShare on FacebookShare on PinterestShare on LinkedInShare on Email
Posted in News
Manage Cookie Consent
To provide the best experiences, we use technologies like cookies to store and/or access device information. Consenting to these technologies will allow us to process data such as browsing behavior or unique IDs on this site. Not consenting or withdrawing consent, may adversely affect certain features and functions.
Manage options Manage services Manage vendors Read more about these purposes
View preferences
{title} {title} {title}
Scroll To Top